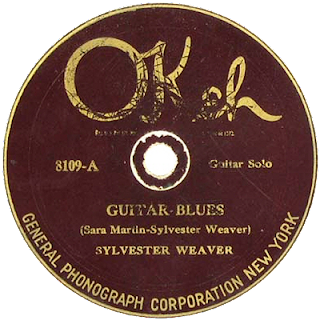 "The first" is an incident of interest to any historian. The most oft quoted incident of the first blues recording is Mamie Smith’s recording of “Crazy Blues” in 1920. I remember after pursuing my curiosity to seek out what was considered to be the first recorded blues record, feeling somewhat disappointed after my first listen to "Crazy Blues":


"Crazy Blues" was recorded on August 10, 1920, in New York City. Smith recorded two songs written by the African American songwriter, Perry Bradford, "Crazy Blues" and "It's Right Here For You (If You Don't Get It, 'Tain't No Fault of Mine)", on Okeh Records. Within a month of the release of “Crazy Blues” it had sold 75,000 copies, and by some reports went on to sell a million copies within the year. Large numbers of records were purchased by African Americans, resulting in a sharp increase in the popularity of race records.

"Crazy Blues" was inducted into the Grammy Hall of Fame in 1994, and, in 2005 was selected for permanent preservation in the National Recording Registry at the Library of Congress.

For all its accolades "Crazy Blues" is in many ways though, quite "uncharacteristically" a blues song; and it seems more accurately descriptive to call it a jazz-blues song as it features multiple brass instruments, a piano and a female singer. Released under the bands name Mamie Smith and her Jazz Hounds, Smith was mostly a vaudeville and jazz performer rather than a blues singer and, unlike Bessie Smith who quickly followed her success, she rarely used blues forms or blues inflections. The Jazz Hounds consisted largely of brass and percussive instrumentation - reflecting the “hot jazz” sounds of New York, rather than the slower rhythmic Delta guitar blues of a the South like Charlie Patton, Skip James, or Robert Johnson. The track is likely a "first" in jazz history as well. The great Coleman Hawkins, then only a 16 year old tenor sax player was in the band and it is most likely his first recording. Hawkins was partnered with the stride style jazz pianist, Willie “The Lion” Smith, widely considered as one of the great pianists of this early jazz style. Smith (real name, William Henry Joseph Bonaparte Bertholoff Smith) was born in New York to a Jewish father and a “Spanish, Negro, Mohawk Indian blood" mother. Hardly the sort of racial lineage I'd been expecting from the first recorded "blues" artists!

Ok, so my quest is actually then a search to find a more "authentic" (there I said it) recorded performance. Smith's performance sounds a bit too staged, a product of a record label searching the edges of a potential market. After years of listening to Muddy Waters, Smith's first is always quite a let down; It's jazz hands replacing sharecropping hands. I'm looking for the first male, most likely southern, individual blues performer to be recorded; something with a bit more grit. So I went searching:

Then I came across Sylvester Weaver's "Guitar Blues" recorded in November 1923, for Okeh Records in New York. I can only find one copy of this song on-line, the first is a really, really noisy 78 record; the below version is the same copy as the first but cleaned up with some processing:


Sylvester Weaver plays his guitar in a highly original manner, which consists chiefly of sliding a knife up and down the strings while he picks with the other hand. (1)

That the first recorded male blues guitarist should use a knife as a slide resonates nicely with W.C. Handy's often repeated story of his first hearing the blues in Tutwiler, Mississippi, in 1903. Handy tells the tale,


"a lean, loose-jointed Negro had commenced plucking a guitar beside me while I slept. As he played, he pressed a knife on the strings of a guitar in a  manner  popularized by Hawaiian guitarists who use steel bars. The effect was unforgettable. His song, too, struck me instantly."(2)

"Guitar Blues" is a delicately picked slide guitar instrumental, most likely played with the side of a knife. The other track Weaver recorded on that day was a lovely ragtime number called, "Guitar Rag", an up tempo bass line coveted by a folk-like run:

Most of Weavers career was spent accompanying female singers - a formula that Weaver and Smith had earlier on proved commercially successful, or with guitarist Walter Beasley. In some ways his Weavers' life is without some of the rougher edges found in the lives of some of the more famous bluesmen but he is a fine musician who cut some wonderful tracks for Okeh. Jas Obrecht gives a more detailed biography of Weaver in his essay "Sylvester Weaver: The First Blues Guitarist on Record" (1)

Here's an even earlier claim claim to the first blues record. By a white band!!!

Legwork done by Unknown at 8:36 AM